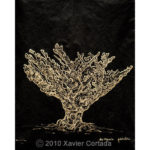 Titled for Biscayne Bay’s longitude, “80.15 W” features the 17 threatened and endangered species that call Biscayne National Park (in Miami, FL) home. In 2010, Cortada created the drawings on carbon paper, a metaphor for the impact (or “carbon footprint”) that humans have had on that animal, even across the boundaries of protected nature preserve. The carbon paper originals were premiered at the national park’s gallery and are in the permanent collection of NSU Art Museum Fort Lauderdale, Ft. Lauderdale, FL.

From 2011-2018, Xavier Cortada served as the Artist-in-Residence at FIU School of Environment, Arts and Society and the College of Communication, Architecture + The Arts.

Cortada often engages scientists in his art-making: At CERN, Cortada and a particle physicist created a permanent digital-art piece to celebrate the Higgs boson discovery. Cortada has worked with scientists at Hubbard Brook LTER on a water cycle visualization project driven by real-time data collected at a watershed in New Hampshire’s White Mountains.

He has collaborated with a population geneticist to explore our ancestral journeys out of Africa 60,000-years ago, with a molecular biologist to synthesize a DNA strand from a sequence 400 museum visitors randomly generated, and with botanists to develop multi-year participatory eco-art efforts to reforest mangroves, native trees, and wildflowersacross Florida.

His studio is located at Pinecrest Gardens.